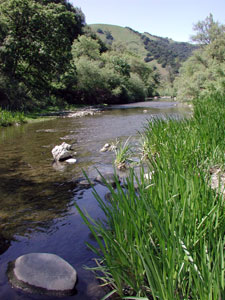 The Alameda Creek watershed covers an area of 633 square miles and once supported a steelhead trout fishery. Steelhead trout are anadromous fish, living out their adult lives in the ocean and migrating up fresh water streams and rivers to spawn and rear their young. Modifications to the Alameda Creek streambed and urbanization of the surrounding land, however, eliminated spawning areas and made it impossible for steelhead to migrate upstream. As a result, steelhead have been absent from Alameda Creek and its tributaries for several decades.

ACWD received $2.1 million from the National Fish and Wildlife Foundation (NFWF), and the Department of Water Resources (DWR) to initiate four projects to improve steelhead migration in Alameda Creek. Through the 2005 San Francisco Bay Salmonid Habitat Restoration Fund, NFWF and DWR have helped to fund other projects that will benefit salmon and steelhead trout in central and southern San Francisco Bay watersheds.